Producing electricity while respecting both the environment and the population is a responsible, lasting and civic commitment

FUTUREN > Wind energy > How does it work?

How does it work?

Composition of a wind turbine

An onshore wind turbine is made up of three main parts: 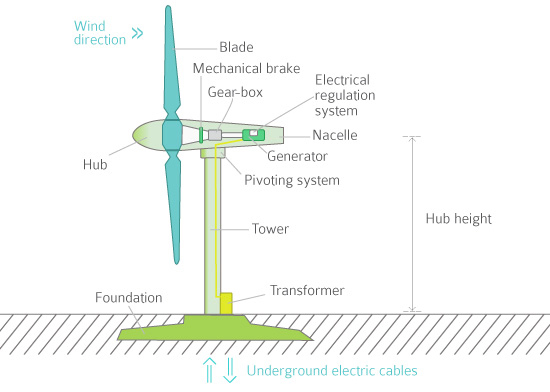 The idea of its operation is simple: the strength of the wind makes the blades turn and initiates the rotor that transmits the energy received to a generator that produces electric energy. The electricity is channeled by an underground electric cable to the public grid.

The transformation from wind to electricity

The difference in pressure between the two sides of the blade creates an aerodynamic force that puts the rotor in motion. This motion is generally accelerated by a gear-box and the mechanical energy transmitted by the gear-box is transformed into electrical energy by the generator.

The generator’s rotor turns at a high speed and produces an electric charge of around 690 volts. This electricity cannot be used directly. It is handled thanks to a converter, then its charge is increased to 20,000 volts by a transformer.

The wind turbines are set in the ground thanks to reinforced concrete foundations, often circular, covered over with seeded soil. They are interconnected among themselves by underground electric cables.

Each wind turbine is connected to the transformer located at the foot and inside the tower. The electric energy produced is sent towards the public distribution grid through a delivery station.

A computer system, linked to the phone network, allows for long distance monitoring and control of each turbine.

To start, a turbine needs wind of at least 12 to 15 km/hr. So that the machine operates at full capacity, winds needs to go from 45 km/hr to 90 km/hr. Beyond 90 km/hr, the turbine is stopped and enters a protection mode for security reasons.

For 1 MW of installed capacity, the annual average production of a wind farm owned by the Group can vary from 1.6 to 3.7 GWh, depending on the quality of the site (wind conditions) and the type of machines (power curve and availability) and meets the electricity needs of 600 to 1,500 households (1).
(1) Calculation assumption: a household consumes approximately 2,500 kWh/year excluding heating.

Wind turbines are more and more productive: their average capacity increases constantly and the turbine manufacturers continue to make improvements. Significant technological progress has been made over the past ten years. In 1999, it took 30 wind turbines to constitute a wind farm of 12 MW. Today, only 4 are needed.