Producing electricity while respecting both the environment and the population is a responsible, lasting and civic commitment 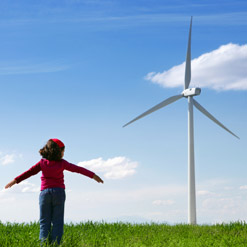 Unlike fossil based energies (oil, gas, coal, etc) that are in the process of being deleted and usually imported, wind energy is a free energy, plentiful and limitless, that contributes to the energy independence of the countries that develop it.

A wind turbine produces energy thanks to the mechanical use of the wind. While conventional production facilities generate a certain amount of waste and/or greenhouse gas, wind energy:

Machines that are mindful of the environment

The lifecycle of wind turbines respect the environment because they replenish in several months the energy used for their fabrication. Their dismantling can be carried out at any time and in a matter of a few days, insuring a complete restoration of the site.

An energy that is economically credible

Today’s wind turbine technology is high performing, mature, reliable and accessible at an increasingly competitive price. The electricity produced is bought at a fixed tariff rate in most developed countries.